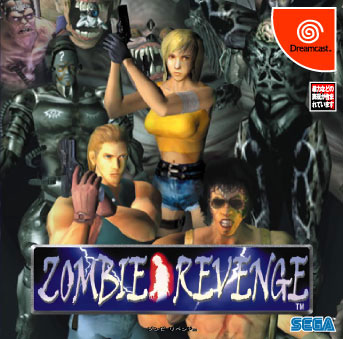 A top secret government plan to use undead soldiers has gone horribly wrong. Just before it was ready to be put into operation, someone unknown interfered. Now a year later the city is the home for the undead. Three agents, Stick Breitling, Linda Rotta and Rikiya Busujima, who have come together from various paths of fate, now join together to do battle against the army of the undead and rid the streets of the zombie scum! The game features multiple weapons and 1 or 2-player arcade action. Each of the characters have different attributes, agility, strength, better with weapons as opposed to unarmed combat. There are a multitude of weapons that can be found through the game such as shotguns and machine guns to battle the undead. There are a range of attacks that can be performed, charging your shot by holding down the button longer, variable shots by locking on the zombie longer, rolling attacks, backward and dash attacks and more. There are a number of game modes accessible from the main menu. The Arcade mode from the coin-op version, an Original Dreamcast version, which gives you options of playing the game with more focus on either weapons only or bare knuckle fighting. There is also a vs Boss and Fighting mode, as well as a Training Room. Zombie Revenge also features downloadable mini games for your VM unit. There is a Zombie Revenge Raising Game where you feed and raise your own zombie. Playing the above mentioned Original mode provides food items for your zombie. The zombie you have raised can also be uploaded to the Internet, or emailed to someone, and other peoples zombies can be downloaded. There are two other mini-games: Zombie Fishing (fish for zombies) and Zombie Doubt (memory test with symbols).