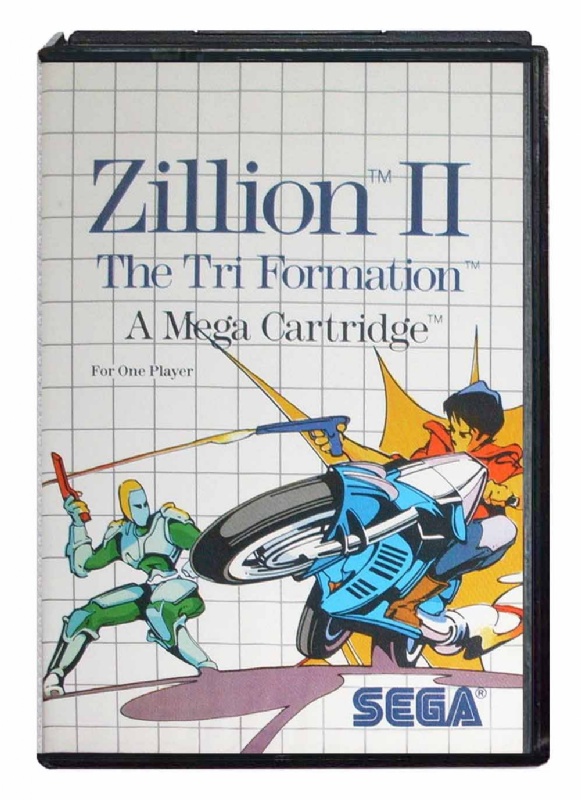 A faint distress transmission, which was barely understandable, was received at the headquarters of the White Knights. Sent from a distant outpost at the extreme edge of the Planetary System, the garbled message told of a new, gigantic Norsa Battle Fortress at the edge of the Norsa Galaxy. Apple and Champ, two members of the elite White Knight special peacekeeping force, immediately set out on a reconnaissance mission to investigate the Norsa Fortress. The last words which anybody heard from Apple and Champ were: "Help us J.J.! Baron Ricks has..." There are eight rounds in the game, and the gameplay is split into two parts. In the odd-numbered rounds, you ride a bike known as the "Tri Formation" which has the Zillion laser beam attached to it. As well as shooting Norsa warriors, you must jump over gaps and the pulsating areas of the floor. If your character comes in contact with their shots, or rides over the pulsating areas of the floor, your life meter will decrease. If that meter is empty, you lose a life. Power-ups can be obtained that will give you the Armorator or extra life. In Rounds 5 and 7, you are required to use the Armorator to survive the round. You can also change between Apple and Champ during these rounds, but only once each. And on the even-numbered rounds, you run-and-shoot your way to a boss. Beware of the Norsa Warriors and other enemies. The same rules apply to those of the odd-numbered rounds, where being shot at or fall in a gap will result in you losing a life.