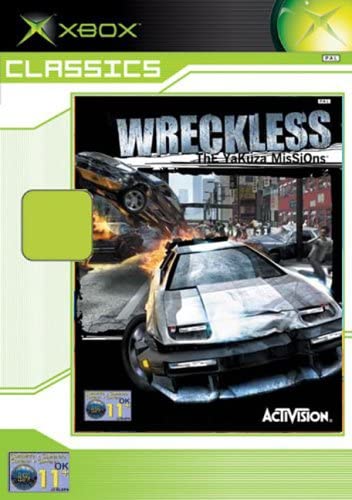 Wreckless could easily be described as the epitome of arcade urban racers, and is without doubt one of the best looking first-generation Xbox titles. Essentially a Crazy Taxi for Grand Theft Auto fans, this is a smash-em-up racer of epic proportions. The storyline is split into two themes, in which you can select one of two modes: either as a pair of female cops out to stop the highway-based actions of the Yakuza, a Mafia-like organisation run by ultra-baddie Tiger Takegi: or a pair of male spies with different missions that also entail stopping the petrol-powered antics of said shady outfit. Wreckless, armed with a physics set-up very much in the vein of Crazy Taxi (i.e. your vehicle is made of dark matter-weight rubber and all other objects seem as though they have been constructed from balsa wood) is an unstoppable racing game in the spirit of the Runabout series. The widely varied missions come complete with a choice of vehicles for the task at hand. Though most missions can be completed by most (if not all) of the machines on offer, you will get a huge advantage by picking the right one. There is a certain pleasure factor detectable when, for the first time, you discover just what it would be like to tear after criminals, through crowded streets, in a monster truck. Wreckless is not a game for hardcore driving simulator fans. It makes no bones about being an arcade racer, albeit one with an unprecedented depth of gameplay. The gaming emphasis is very much pick-up-and play, and will provide hours of casual entertainment that will immerse you just enough to make you want to come back again and again. As one of the best looking games available for the Xbox, at least at launch, this game will, if anything, impress your mates.