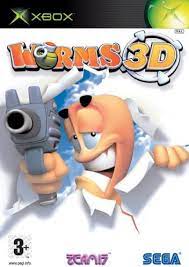 From the moment 3D gaming was conceived, this game has been on the cards at Team17. The only reason it's taken so long is that lack of adequate technology at the time slowed things down somewhat, due to the game's well-known reliance on deformable landscapes. Well, finally, eight years after the original Amiga version, those impetuous invertebrates are back and in full 3D. Hooray! The game itself is pretty much what we had hoped for. All the modes, features and options of previous Worms titles remain intact, but now benefit from more depth thanks to the added dimension. A versatile controllable camera keeps things simple - you can zoom in and out and rotate the view via the analogue stick (or keyboard and mouse for PC) and therefore get a good view of the battle in progress. Control of the Worms themselves is intuitive and feels solid - each of the little guys automatically navigates the levels' undulations and is also still in possession of the classic back-flip manoeuvre for hopping up to higher levels. Once you've settled on your attack position it's simply a case of seeking out your victim and then selecting your preferred method of destruction from the massive list of weird and wonderful weapons. The subsequent taking out of one's opponents translates well to the 3D perspective thanks largely to an eminently useful first-person view, accessed by the right shoulder button. This enables you to accurately judge trajectory before setting your power - not forgetting to take wind direction and speed into account. With regard to the game's weapons, all the favourites are included and in a lot of cases improved upon - such as bazooka, grenade, dynamite, air strike and sheep - as are a number of brand new ones. Although we all know that the multiplayer aspect of Worms is where most of the fun is to be had, Worms 3D also features a strong single-player campaign, featuring a wealth of missions across which you can unlock new landscapes, missions, challenges and sound sets. There's also a hefty amount of tutorials, challenges, and a new 'Wormpot' mode that allows you to randomly configure various game options via a fruit machine-style interface. It's taken a while, but the elusive Worms 3D has finally become a reality. And quite frankly, it's been well worth the wait.