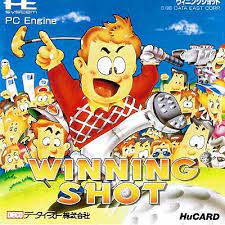 Winning Shot is a golf game which is completely played from a top-down perspective. The hitting mechanics are based on a menu in which the player can set the used club (out of 14), the hitting strength and the location where the ball is hit. The courses feature many obstacles which should be avoided and wind which should be calculated in. Besides the single-player mode in which the player participates in tournaments there are also two multiplayer modes: one for two players and another one for up to four players. The basic goal for both is to have the lowest amount of hits after 18 holes, but in the second mode there are penalty points assigned for every hit above the hole's limit.