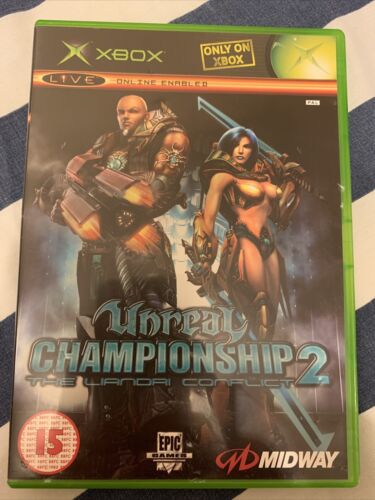 The first Unreal Championship on Xbox was an adaptation by Digital Extremes of the PC deathmatch yardstick and physics engine showcase Unreal Tournament. The game took advantage of the Xbox's abilities, offering five multiplayer game modes: Deathmatch, Survival, Domination, Bombing Run and Capture the Flag, which could all be played either by four players on one machine or with up to 15 players on Live! The online service offered a decent spread of support, with downloadable content, online scoreboards, and the possibility of joining a clan. As well as the multiplayer mode, the game also provided a single player game, in which players could face various enemies alone or lead an AI team in Capture the Flag and others. Just over two years later and we have a follow-up to UC, subtitled The Liandri Conflict. The title showcases a feature new to the Unreal franchise: acrobatic melee combat. The creators claim that the fast FPS action that UC fans can expect is combined seamlessly with this gameplay addition, which gives players access to deadly hand-to-hand techniques. Melee attacks allow you to freeze opponents and administer a really heavy blow and deal out a humiliating coup de grace. Characters are more mobile than ever before, and can leap, spin and backflip as they duel with their enemies. The game features an adrenaline meter which allows you to use special abilities, and this is filled by performing flashy finishes. Six multiplayer modes are available: Deathmatch, Team Deathmatch, Nali Slaughter, Overdose, Survival and of course Capture the Flag. All are fully customisable according to the wishes of the players. All the classic Unreal weapons are there: Rocket launchers, Ripjacks and Flak Cannons, along with new firepower like Grenade Launchers. You can play online with eight players on Xbox Live, or you can directly link your consoles together for a clutter-free LAN party. Like it's predecessor, Unreal Championship 2: The Liandri Conflict also features a single player game. Story mode includes the Ascension Rites campaign in which, as a soldier in the Nakhti Imperial Legion, you must stop a corrupt businessman becoming emperor. As well as that, there's a load of Tournaments and Challenges to test you while you are on your own, many of which you'll have to unlock as you progress. Featuring a load of outlandish UC characters and more than 40 maps to battle on, as well as the all-new gameplay, this new edition looks to stretch the scope of the Unreal franchise even more.