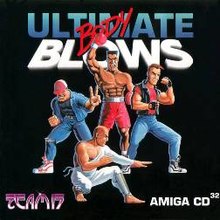 Ultimate Body Blows is a compilation of Body Blows and its sequel, available only for Amiga, Body Blows Galactic. The game combines everything from its predecessors and adds more colors, improved graphics and music, more backgrounds and endings, giving the player a total of 22 characters (including the invincible Max and his true self, the Terminator T17) and many fixes. The game was released only on a CD offering the ingame soundtrack played directly from a CD.