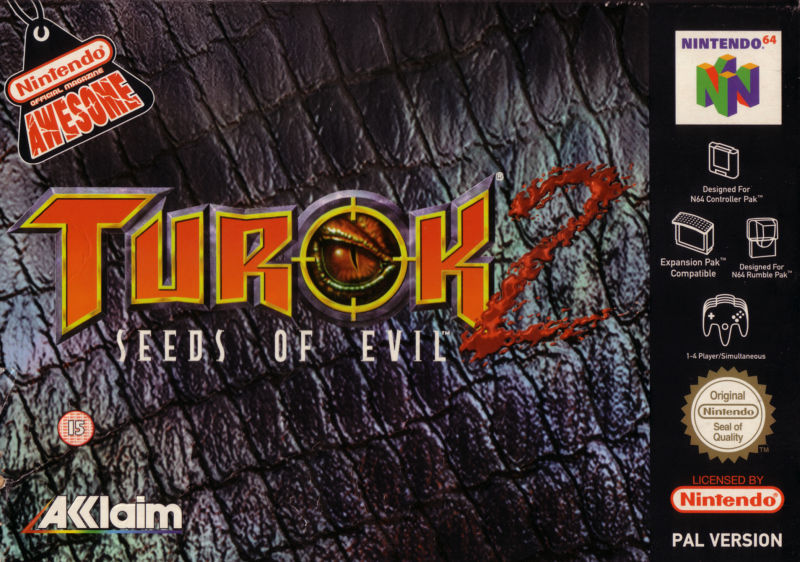 Turok 2: Seeds of Evil is the sequel to Turok: Dinosaur Hunter. Having defeated the Campaigner, Turok throws the Chronocepter into a waiting volcano to destroy it. Unfortunately the blast awakens an even deadlier force - The Primagen - who lays in wait for his freedom from a wrecked space craft, buried at the core of the Lost Land. Once again a Turok is tasked with restoring peace to the land and stopping the Primagen from merging Earth with the nether world. The game features an armory twice as large as its predecessor, and many weapons will even have a later update that makes them even more devastating. New weapons include the lethal discus Razor Wind, a proximity mine layer, and the Cerebral Bore, a flying grenade that homes in on an enemy's head, drills through their skull, and then explodes. Enemies have damage models now, allowing limbs to be torn off or bloody holes to be blasted through torsos. Turok won't be facing any human opponents this time, but will find himself under attack by plenty of dinosaur/human hybrids, brutish giants, and man-sized insectoids. The goal of each level is to reach the end and defend one of the five totems that keeps the Primagen captive in its ship as well as finding keys to unlock the portals that lead to later levels. In each level Turok can also find a special spiritual power, such as immunity to lava or a long jump. After finding a power, he will need to return to an earlier level to use that power to find one of the five keys that opens the portal to the Primagen itself. While searching for spiritual powers Turok will occasionally find portals that transport him to a strange place full of deadly creatures who appear to be unaffiliated with the Primagen, but discovering their true purpose is the job for another Turok. A multiplayer game is included as well, with options for between 2 and 4 players and game-types like deathmatch and capture-the-flag. This multiplayer mode would later be expanded into a full game with Turok: Rage Wars Turok Franchise | Nintendo 64 | N64