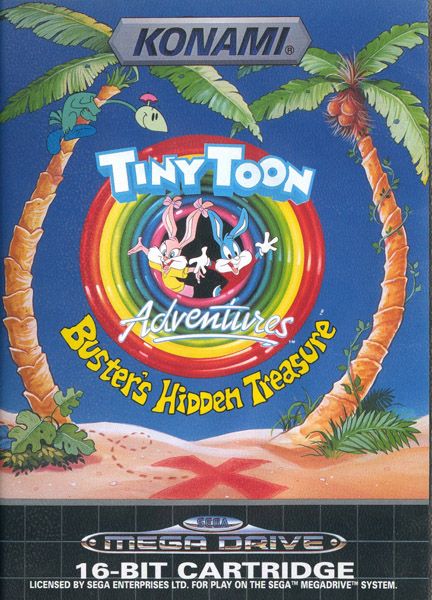 While cleaning up Acme Looniversity, Buster discovers a map leading to a secret treasure! But Montana Max swipes the map, and goes after the treasure himself. He also gets Dr. Gene Splicer to brainwash most of Buster's friends, and kidnaps the rest of them! Buster has to reclaim his map, his treasure, and save everyone while he's at it! Buster's Hidden Treasure is a platform game starring Buster and many other Tiny Toons characters. As Buster, players run through each level, jumping on enemies to defeat them. Buster can also pick up carrots - for every fifty he collects, he gets a helper friend which can be used to destroy all enemies on the screen. Although Buster only starts the game with three hearts, his health meter can be increased by collecting bells. The goal of each level is to find Gogo Dodo, who will let Buster exit the level. Similar to Super Mario World, Buster's Hidden Treasure has a world map that you can select your level from. Also similar to Mario World, some levels contain hidden exits, creating shortcuts, or granting players access to tougher levels.