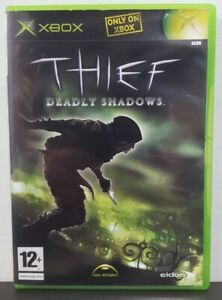 The second of Ion Storm's sequels in 2004, Thief: Deadly Shadows is probably even more highly-anticipated than Deus Ex: Invisible War, mainly due to the fact that the original Thief on PC, released back in 1997, was one of the pioneers of the now common 'stealth' gameplay. The game sees you once again assume the role of Garrett, the master thief who is rarely seen, never caught, and capable of breaking into the most ingeniously secured places. Placing a much less charitable spin on the age-old Robin Hood idea, Garrett steals from the wealthy and gives to, well, himself, in order to make a living in the dark and foreboding City. The game's story tells of an impending Dark Age. In his efforts to prevent it, Garrett inadvertently rouses an ancient, hidden evil, and subsequently finds himself without allies, standing alone between the City and the forces that would crush it. The gameplay throughout sees you using your skills to sneak throughout the City into castles, mansions, prisons, cathedrals, dungeons, and museums, past armed guards, hired muscle, angry thugs, hideous monsters and a whole lot more. The main objective is to steal the City's oldest treasures in order to prevent the impending darkness, as foretold in the prophecies. As well as your wits and sneaking abilities, at your disposal is a wealth of thieves' tools, including the likes of lock picks, wall climbing gloves, flash bombs, and a variety of special arrows for your bow. One of the key new elements to the proceedings (and one that has a very consequential effect of the gameplay) is a new dynamic lighting system, which is responsible for those titular Deadly Shadows. As such, every character and every object within the game world casts a real shadow, and you must dynamically manipulate these in order to make best use of your surroundings. You've also got a fairly sophisticated enemy AI up against you, with guards that, as well as being able to both see and hear you, can also track evidence and suspicions, search for intruders, fight, and give chase. Also new in Deadly Shadows is an added perspective. As well as the standard first-person point of view, the game now allows you to switch to third-person at will and thus make better use of manoeuvres such as sneaking up on guards, fighting with a dagger, climbing walls, and peeking around corners. If stealth, sneaking and silent kills are your bag then you won't want to miss out on Deadly Shadows. The original more or less introduced us to the concept - this third chapter returns to remind us how it's supposed to be done.