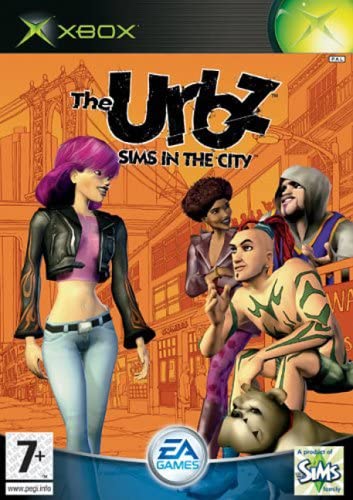 The Urbz Sims in the City ( XBOX)

Amongst EA and Maxis' biggest franchises, The Sims has sold tens of millions of games in the past four years with the help of the series' Bustin' Out console debut. A year later, a brand new life sim called The Urbz is ready, bringing those virtual inhabitants into the realms of real city life for the first time. Complete with new environments and new objectives, your ultimate goal in The Urbz is to simply reach for that penthouse in the sky by earning a stellar reputation together with the ability to influence those around you. However, your adventure begins at the very bottom of the social hierarchy, and your earlier goals are more simplified, requiring NPC interaction with Chinese Takeout bosses and running errands for local nobodies. But it's through these menial tasks as you take direct control of your 'Urb', that you'll discover how to gain access to known social circles so that you can start working on your city lifestyle. You can even buy tattoos to get yourself noticed, and exchange valuables through a handy PDA-like interface. And while that's core of the game, EA and Maxis haven't forgotten about the character customisation and extensive list of player choices that made Bustin' Out so massively popular. Complete with a fresh set of looks, players can now design their protagonists to fit in with dark and urban feel of the game's locales. There are nine neighbourhoods in all, each of which comes with a population of distinct individuals and a variety of appropriate soundtracks. Environments are vast, and presented in full 3D with a number of real-time lighting and weather effects, making for a convincing game world that's a pleasure to be part of. Sims games have always been welcome additions to the life-sim genre, and though The Urbz may be regarded by some as a spin-off from the original PC games, it's a great addition to the series.