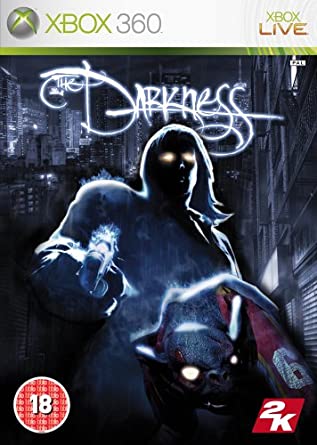 The Darkness follows the life and loves of Jackie Estacado who, on the advent of his 21st birthday, finds himself with the dubious honour of possessing the Darkness, a sinister supernatural entity that pre-dates human history. Yeah, that's right. On your 21st, you were/will be drinking bizarre cocktails invented by your mates involving vodka, beer and mud, and this guy's dealing with evil from the dawn of time. Since he just happens to be a hitman for the Mafia, much bloodshed ensues. For the game, much of the fantasy that decorates the comics has been ditched in favour of a gritty, more horror-like feel. Jackie's not the pretty-boy he was in the comics: he hangs about in seedy back alleys and subways rather than glamorous night clubs, and he looks a bit Goth instead of a bit Gucci. You won't see fancy armour or drop-dead-gorgeous angels in the game outing. Instead, expect a long leather coat and ugly mobsters. From seemingly simple beginnings as a noir-ish crime exploit, things quickly get nasty. The power of the Darkness imbues Jackie with a number of unpleasant attributes that are gained as you progress through the game. These often (but not always) take the form of be-tentacled creatures. They're capable of numerous ghastly feats aimed at solving puzzles and eviscerating your enemies. Basically, if you want to be the nastiest thing on the screen, this one's for you.