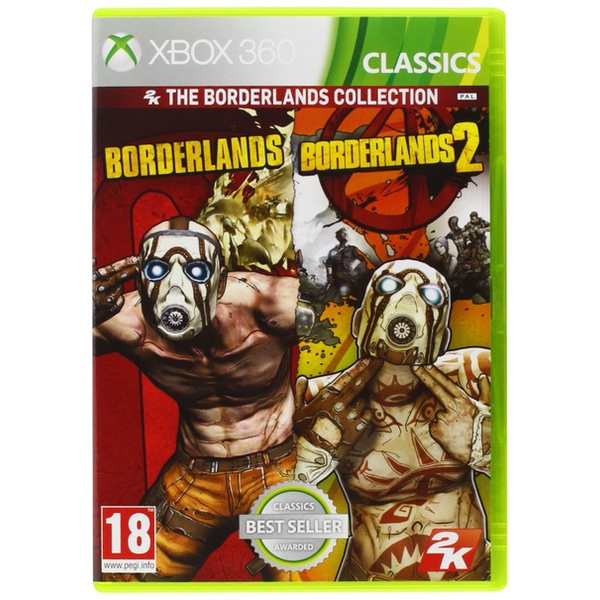 Borderlands Borderlands is a futuristic science fiction first person shooter with role playing elements from Gearbox Software, who previously created the Brothers in Arms series of games. The game seeks to move FPS games on from the evolutionary cul-de-sac some people believe them to currently inhabit. Borderlands is set on Pandora, a planet at the edge of the galaxy where colonists have been drawn by the expectation of vast mineral wealth. However, when the planet turns out to be barren, the rich leave, and the poor are abandoned to chaos and lawlessness: a futuristic wild frontier like the American old west. The remaining settlers elect to try to find and exploit abandoned alien technology as their route to getting off this forsaken planet. Pandora's vicious indigenous life-forms decide that the settlers look like an appealing snack. In this hostile and dangerous environment, you play as a mercenary treasure hunter. And here the RPG elements of the game come into play - to establish the trust of the locals, you have to undertake missions to win their favour. The game continues in this vein: there is a main story to progress through, but there are side missions that can be followed at any time to help you gain items and experience. Experience enables players to level up, RPG style - so the game has no difficulty levels, instead featuring a scalable challenge system. If a particular battle is too tough for you, back track, complete some side-quests and then try again with improved abilities and equipment. When it comes to equipment, Borderlands has another surprise up its sleeve - a truly phenomenal amount of different weapons. A weapons "manufacturing" engine uses a randomise feature to create truly mind numbing numbers of combinations - over 600,000 different weapons, including handguns, machine guns and sniper rifles. But also with alien technology, plasma rifles and rocket launchers too. Players will always be able to search out bigger, badder and better weapons. And to avoid screeds of stats to tell you what a weapon does - they are colour coded to give you an at-a-glance idea of their capabilities. Just as the weapons of Borderlands are randomised, so is the terrain. Main locations such as towns are fixed, but the landscape between them is generated just for the game you are playing. Borderlands also has a multi-player co-operative mode, in which, any experience earned by completing missions is shared between team members equally, because everyone's skills will be required to successfully complete a mission. Borderlands 2 Borderlands 2 takes players back to Pandora for more mad, shooty action. So, what's new? For starters, Gearbox has added a number of gameplay features that can help you out in a pinch - the most direct one being a special perk that can be activated by hitting the trigger buttons. When you're not pumping lead, your ammo is replenished over time too, allowing you to go on a proper killing frenzy when you're nearly down and out. Insta-Health vials will only go so far this time around. What changes the game - in a good way - is the introduction of Badass ranks. While characters still have a level cap of 50, Badass ranks don't have such a limit. When you level up in this manner, you earn a Badass token, which can be used to spend on increasing a number of base statistics. The genius here is that tokens spent to increase stats are applied to every single character you have on your profile. Add the mystery of golden chests, and the secret golden keys that require special actions to obtain, and you have a sequel that puts a lot of emphasis on the RPG side of things. Gearbox have obviously put a lot of extra care and attention in Borderlands 2. On the surface, it's business as usual - familiar graphical style, familiar locations, familiar storylines. But players get to be involved with the inhabitants of Pandora in a way that's not seen in the original game. The amount of improvements in Badass points and golden keys also shows that Borderlands 2 will be a much deeper and rewarding RPG experience to complement to intense FPS action.