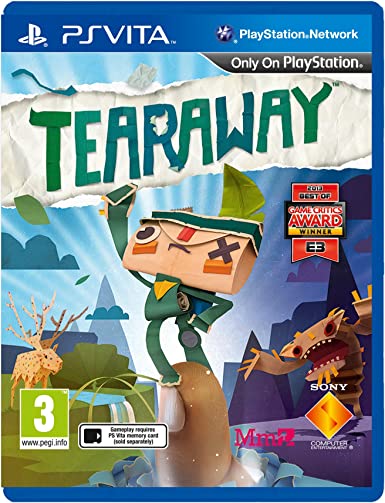 Tearaway in an action game set in a world where is everything is made out of paper. It is about a messenger, either the male character Iota or the female character Atoi, controlled by the player, who needs to deliver a message to the sun. The character is the message that needs to be delivered (the head is an envelope). At the same time, the player is also an actual character in the game, referred to as "the You". It is represented by the sun showing the player's face in the centre using the Vita camera, similar to the way it is shown in the Teletubbies TV show. The sun appears in many parts of the game and always shows a direct, real-time video capture of the front camera. The core gameplay is similar to a traditional third-person action platformer where the character needs to explore, complete environment based puzzles and defeat enemies known as Scraps who shadow the sky and attempt to obstruct the delivery of the message. The game uses a large amount of other interaction in different ways. Using the rear touch pad, the player can interfere with the game world as it matches the movement of the fingers as they are shown pushing through the bottom of the game world, for instance to defeat enemies. This technique, also available on the front touch pad, can be used to make tears into the world, create hills, move objects, launch the messenger using drumskin-covered platforms, unroll paper bridges, or to poke through paper walls. Objects have a specific pattern that show the player whether the touchpad requires drumming or tickling, or pulling or peeling, to interact. By blowing into the microphone strong gusts of wind can be created that influence the game world. The character can also pick up objects and throw them. Certain enemies need to be dodged and can only be picked up and be thrown when they are stunned after dodging an attack. Other enemies are defeated by jumping on their bellies. Each area has different types of items to collect. Many abilities are unlocked gradually, such as the Weaponized Squeezebox to suck in things and blow them out, riding a pig, shaking the entire world using the gyroscope function or rolling into a ball form. Along the way confetti can be collected. It is used to unlock decorations to customize the messenger. There are many characters to meet that provide quests for rewards. In some of them new items need to be designed. This is done in a separate screen showing a pencil and a peace of paper. Using the front touch pad the player draws a design (with multiple layers possible) and then uses scissors to cut it out, for instance to create a crown. There are pieces of paper in different colours available. This mechanic is used to customize many items and characters in the game world. There is also a camera to take pictures of characters in the game or selfies of the messenger or the player, with different types of filters and lenses available, unlockable through confetti. Along the way papercraft plans can be collected. They are accessed through a profile on the tearaway.me website where photographs are also stored. The papercraft plans, with different skins, can be printed out to create items from the Tearaway world in real life. The rear camera sometimes uses the real world environment as a layer for the bottom of the game world and it also possible to take pictures of real life items and use them as skins for objects in the game.