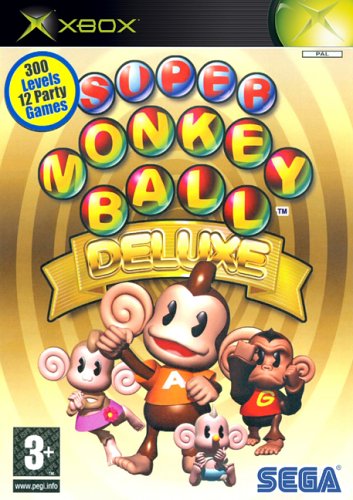 It's a MONKEY. In a BALL. And you move the WORLD around the MONKEY! This concise and brilliant premise was the concept behind Super Monkey Ball. The balancing masterpiece by Toshihiro Nagoshi's Amusement Vision was the SEGA department's flagship during their glory days and, we would argue, the strongest title by far in the European Gamecube launch line-up. Carrying on in the tradition of the greatest games on the N64, the game challenged the solo player to master its deep yet intuitive gameplay, tempering this with a selection of party games ideal for playing with visiting friends. Even these gem-like minigames threw a gauntlet down to obsessive perfectionists: Monkey Target was as accessible as a pub pool table to the masses, but its shimmering azure environment also became the arena for showdowns more reminiscent of a Grand Master duel at the Crucible. Collecting five bananas and landing on a 500 point buoy, without magnet ball, in a piffling 8mph wind? Not only was this feat possible, it was a pre-requisite if you wanted a chance of appearing on the internet leaderboards in the later days of competition. Comparatively few people managed to finish the full game. Completing the 10 Beginner, 30 Advanced, and 50 Expert levels was challenge enough even with plenty of credits, never mind the fabled Master mode that was unlocked if you managed to complete the whole lot on one life. Nonetheless, people clamoured for a sequel, and after a painstaking wait - at least for European console owners - a sequel was delivered. In this, AV addressed many of the criticisms of the original that people were churlish enough to make. Point-missers noted the lack of any kind of storyline explaining the antics of the sphere-bound simians; Story Mode was added, which introduced Dr. Badboon, an evil ape who wished to deprive the peaceful Jungle Island monkeys of their much-loved bananas. Story mode also addressed another problem, allowing players to try troublesome levels over and over again without loss of life. Whilst this would have been against the spirit of the arcade-derived original, it suited the stages in SMB2 well enough, and allowed them to include more puzzle-like and exploratory elements. In any case, a single player game structured in the same way as the original was also included to appease purists. Some people felt the level design of the second game inferior to the first. These are the same people who, when pressed, admit they never even made it more than halfway through the original's Expert mode! The truth is that although the levels in SMB2 do have a different 'feel', they are exploring techniques learnt in the later stages of this mode, such as climbing steps and, perhaps the most demanding discipline, manipulation of the level whilst your monkey is airborne. The mini game tally was doubled to a dozen, further strengthening the game's appeal in the 'post pub' category. Super Monkey Ball is now finally available to PS2 and Xbox owners, in the form of Super Monkey Ball Deluxe. The game includes both SMB 1 and 2, with all their attendant mini-games. The gloat is further wiped of the faces of Gamecube owners with the news that the games will also include nearly 50 never-before-seen exclusive new levels. We can confirm that the game will include no gangster/drug dealer role-playing elements, nor at any point in the game do you step into the boots of a heavily-armed, country-invading, propaganda-affirming, American G.I. All the same, we urge you to buy it, if only to make Nintendo fanboys jealous. PS2 and Xbox owners, you owe it to yourselves to find out how lucky you are. Grrr, it's wasted on them.