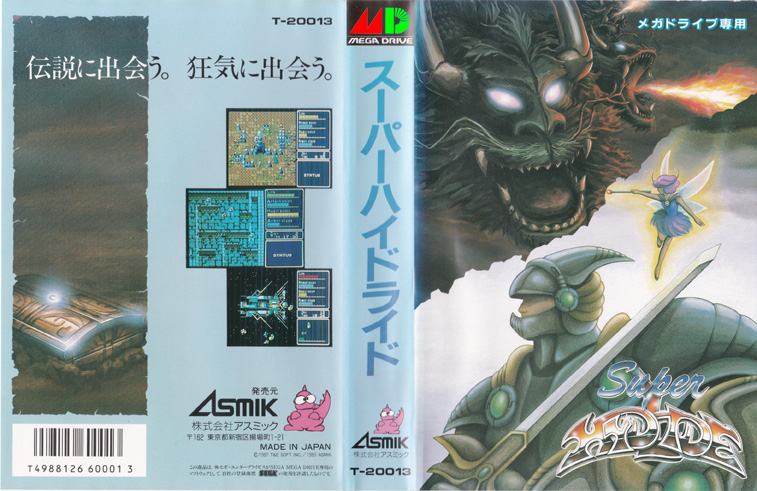 A long time ago, evil descended upon the peaceful people of Hydlide. Old legends tell of a lone brave hero who saved Hydlide from the imminent threat of doom - the evil demon Varalys. Since then, the people of Hydlide have lived through centuries of peace. But one dark evening, a huge column of fire exploded out of the depths of Hydlide. The next morning, strange doors began to appear from nowhere. Many who were curious entered these doors, but were never seen again. From that day on, unusual events and disasters began to take place. Huge cracks opened in the ground, scarring the beautiful lands, floods wiped out entire villages. And then the monsters came. The Hydlide council feared that the same evil in the legends was back again. A wise old oracle predicted the second coming of evil. He also spoke of a young man who could save Hydlide from the grave danger. This young man is you... Super Hydlide (originally entitled Hydlide 3: The Space Memories) is the third entry in the Hydlide series, continuing its action RPG legacy. Character creation allows the player to choose one of the four character classes: Warrior, Thief, Priest, and Monk. In combat, the protagonist uses melee or long-ranged weapons or casts magic spells. Unlike the previous games in the series, the player is required to press the attack button during melee combat, instead of simply "bumping" into the enemies. There is an internal clock in the game, which makes it necessary for the protagonist to sleep periodically and regain his strength. The main character also has to eat from time to time, otherwise his hit points will gradually decrease. The morality system from the previous game returns: killing friendly creatures will reduce the player's morality level, which will eventually have an effect on one of the game's most decisive battles.