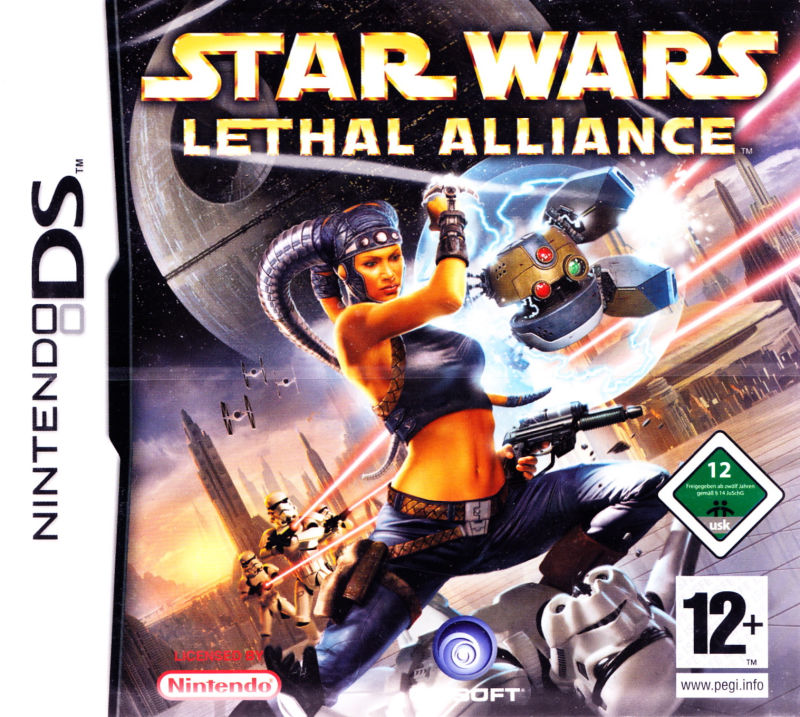 The story revolves around two protagonists, Rianna Saren, a Twi'lek, and Zeeo, a multi-functional security droid. Rianna was sold into slavery, but eventually escaped and ended up following the criminal path. Vengeful and deadly, she set her aim to exact revenge on the Imperial slave master. Zeeo has a history with the Imperial slave ring as well, and after Rianna removed its restraining bolt, the two of them formed a lethal alliance with knowledge and mercenary skills. The storyline takes place between Episode III and Episode IV. Princess Leia has a plan that would ensure the future for the Rebel Alliance, and Rianna and Zeeo are perfect candidates for the job, both due to their skill set and their disposition toward the Empire. They are set to steal the plans for Empire's most deadly weapon, the infamous Death Star. Basic gameplay happens on the upper screen where you control your character in 3rd-person perspective. You can see both Rianna's health bar and Zeeo's energy level. The alliance meter fills up whenever they execute cooperative actions which become more efficient when the meter is filled all the way to lethal. In the lower display, you can see Rianna's weapons and a mini-map which shows mission objectives. Rianna's basic combat consists of default close-combat weapon and a couple of blaster gun variations. She can also use fixed enemy turrets. While Rianna is a woman of action, Zeeo is one of means and as such can turn off alarms to call off the enemy reinforcements, deactivate shields, or unlock doors. Some of its interactions will launch a corresponding mini-game. Game also supports several different multiplayer modes. Survival mode is a first-person droid shootout for up to four players throughout four different levels. Power Converter mode lets the players control Zeeo where the winner is the first one to repair the destroyed panel. And in Virus Outbreak mode you battle with up to three other players where one player is infected with energy-eating virus and needs to contaminate another player to survive, thus making the winner of the last surviving player.