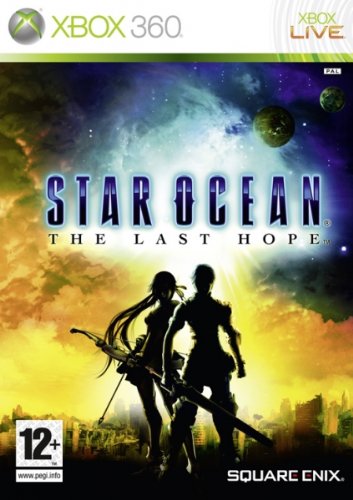 Star Ocean: The Last Hope is a single-player, role-playing game released exclusively for the Xbox360 system. The Playstation 3 version, Star Ocean: The Last Hope International, released one year later, is a different game because of its additional content and features, although it shares the story. The story takes place prior to all other games in the series thus far - Stardate 0010. The opening video segment shows the Earth being bombarded by nuclear weapons during a world war. In the aftermath, survivors have been forced to live underground because the surface has become toxic. To save our species, a decision is made - a new homeland must be found for humanity. Space Reconnaissance Force teams are launched into the "star ocean" of outer space in four separate spaceships as mankind's "last hope". The main character is Edge Maverick who starts out as a crew member but soon becomes captain of the SRF ship, the Calnus, which the player will control. The ship has different rooms for item creation crafting, "Private Action" between characters, or picking the next travel destination. Edge and his companions will visit more than six planets, explore towns and dungeons and meet alien races, both friendly and hostile. Some of the aliens will join Edge's party. There is exploration, character interaction, conversation and team-oriented combat in real-time. The numerous cut-scenes can be skipped if desired, and saving the game is only possible at designated spots on the map.