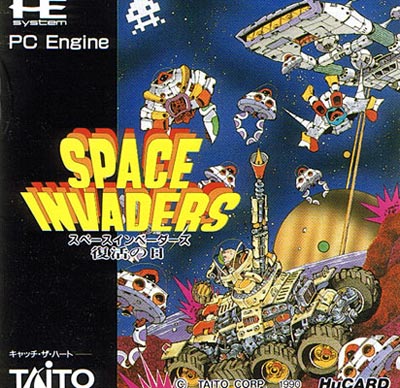 This version of Space Invaders is based on the 1994 arcade game Space Invaders DX but lacks the parody mode of that game. What remains is the classic mode that allows the player to choose the type of arcade cabinet (upright, black & white, etc.) as background to the action as well as the versus mode for two players. The versus mode is split-screen, each player trying to survive and eliminate more invaders than the opponent. The Game Boy version has both one- and two-player modes using the usual Game Boy tones (black and grey). However, plugging the cart into a Super Game Boy allows playing the game in all four cabinet types of the SNES version. The PC Engine (TurboGrafx) CD version offers an additional "cosmic versus" mode, where the background is composed of anime-style pictures of girls. They also appear in the "omake mode", which is a single-player variant with the same backgrounds.