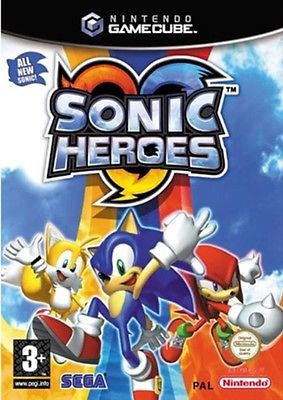 Sonic Heroes is a 3D action-platformer in which the player takes control of a team of 3 characters, each with a special ability - speed, fly and power. The objective of the game is to race through levels as quickly as possible whilst defeating enemies and collecting rings. Your time, rings and enemies defeated make up a point system, and more points mean a higher rank on the level. There are 4 teams of characters each with their own changes to the gameplay: Team Sonic is the intermediate difficulty featuring Sonic (speed), Tails (fly) and Knuckles (power). Team Shadow is the hard difficulty featuring Shadow (speed), Rogue (fly) and E-123 Omega (power). Team Rose is the easy difficulty featuring Amy (speed), Cream (fly) and Big (power). Team Chaotix features new mission-based objectives with Espio (speed), Charmy (fly) and Vector (power). The game features 4 modes: Story Mode, giving players the opportunity to play through levels as the story progresses. Challenge Mode, giving players the opportunity to replay levels that they have previously cleared in Story Mode Battle Mode, a multiplayer mode where players can race or battle each other Tutorial Mode, teaching players the basics of playing the game.