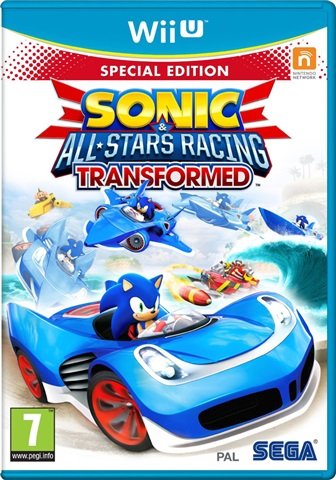 For the last couple of years Sumo Digital has been trusted in delivering spinoff experiences that mash together the best of SEGA's formidable history. Its latest project, Sonic & All-Stars Racing: Transformed, looks set to dethrone Mario Kart as the king of mascot racers. Although it is similar in appearance and concept to Nintendo's own moustache-heavy karter, this - and its 2010 predecessor, Sonic & SEGA All-Stars Racing - is quite a different beast in terms of control and gameplay mechanics. Indeed, Sumo has said that it's more like "OutRun with Weapons" than Mario Kart. And it's hard to disagree. In Transformed, Sumo has taken the core driving concept and cranked it up to eleven - car drifting is a lot tighter, and handling feels very responsive no matter who you play as. Tricks on the L1 and R1 buttons have been replaced with a barrel roll manouevre, which still results in a burst of extra speed upon landing but can double as a quick mid-air cornering function. Double-tapping the trick button whilst on ground can also result in a quick dash to the left or right. Where the game comes into its own however is in the transformation of just about everything around you. Tracks consist of three different kinds of vehicular racing - car, hoverboat and plane. As you drive from tarmac to a water ravine, your vehicle automatically alters shape to better compete in the changing elements. Launch from a ramp on water to a mid-air section, and your hoverboat transforms dynamically into a plane. You can, of course, enjoy all of this in multiplayer action against friends. If All-Stars Racing was a great display of SEGA fanservice, you'll go absolutely gaga for the level of detail placed in Transformed. Gilius Thunderhead from Golden Axe and Vyse from Skies of Arcadia are included as brand new characters to the racing track, and courses such as Panzer Dragoon's Ruined Palace and Super Monkey Ball's Temple Tumble are enough to make any SEGA fan's jaw drop.