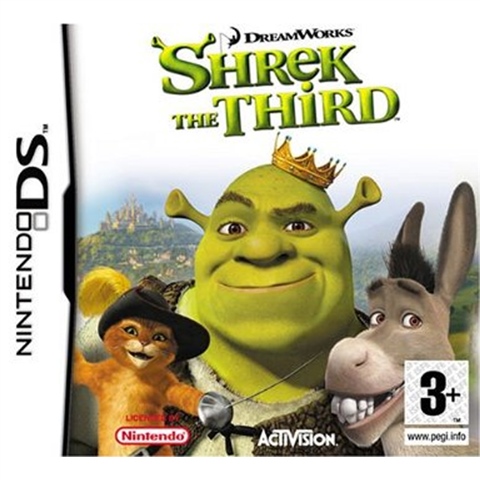 The big Scottish green guy's back, and someone wants to make the poor blighter king. Even more unfortunate than the promise of looming monarchy, however, is the fact that Prince Charming has taken it upon himself to invade the kingdom of Far Far Away with an army of villains at his back. Let the next twisted fairy tale in the Shrek series commence! Departing from the brawler gameplay model of its console counterparts, Shrek the Third on the handheld takes players beyond the land of Far Far Away. If you're a little bit scared at the prospect of going even further than somewhere with 'Far Far Away' in its title, try not to worry yourself too much. Shrek is joined by his old pal Puss-in-Boots, as well as Fiona's newcomer cousin, the ferociously named Arthur Pendragon with whom players can switch between on the fly. You'll need to learn to play to each character's strengths in order to beat the challenges and puzzles thrown at you. Of course, you can expect all of the above to come with a healthy dose of Shrek's now trademark humour. Don't be surprised, though, if that results in some trickiness when Donkey decides to try his luck with Merlin's magic wand.