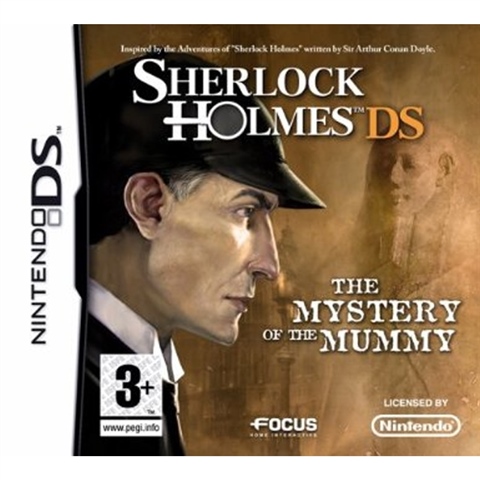 Sherlock Holmes DS the Mystery of the Mummy ( DS)

Prepare yourself for a great adventure. Elementary? I think not! The Mystery of the Mummy invites players to step into the shoes of Sherlock Holmes and embark upon a remarkable adventure, as you are charged with the investigation of the mysterious case of a missing archaeologist and a valuable Egyptian mummy in England at the turn of the century. What begins as an ostensibly simple case quickly becomes a web of intrigue, robbery, priceless artefacts, and murder! Your skills as an investigative sleuth will be tested as you attempt to uncover the truth behind the mystery, exploring the many rooms of a large Victorian mansion, solving the many puzzles and riddles that you will encounter. Uncertain leads, an illusive saboteur, the disappearance of an ancient mummy, a strange murder..the plot thickens. Inspired by the novels and characters of the venerable Arthur Conan Doyle, The Mystery of the Mummy offers an involving storyline with a wonderfully appointed, atmospheric and graphically detailed mansion. There are also numerous objects to search for, collect and use during gameplay.