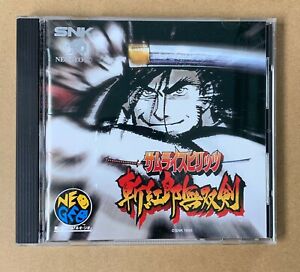 The 12 samurai (and ninja) elite are back, this time to answer the threat of the demon Zankuro, Minazuki. The possessed swordsman has brutally slaughtered innocents in his path, yet could not raise his blade to the cries of an innocent baby. Vowing never to spill innocent blood again, he targets those who live by the way of the sword...but now the hunter becomes the hunted: Amakusa, Shiro Tokisada - The orb wielding Boss from Samurai Shodown I is now a contender in the race against Zankuro, his next religious sacrifice for enlightenment. Basara, Kubikiri - The embodiment of hate has risen Basara the Executioner from his grave for revenge against Zankuro for murdering his lover (and himself). Love is stronger than death. Gaira, Kafuin - A Buddhist monk with giant prayer beads as his weapon. He had an argument with his grandfather, the great Nicotine and was kicked out from the monastery. Wandering aimlessly, he witnesses the demon Zankuro spill innocent blood. The monk vows to teach the demon a thing or two on the teachings of Buddha...the hard way. Galford and Poppy - The American Ninja and his beloved dog seeks to defeat the demon Zankuro in the quest for justice for the deaths of refugees killed by Zankuro. Genjuro, Kibagami - Former colleague of Haohmaru, now rival. Genjuro the Assassin almost killed Haohmaru in a match for a scroll that would increase one's fighting skill, but instead got expelled from his fighting school. Flamed with vengeance, now he's has his sword aimed at Haohmaru's heart...history will not repeat itself. Haohmaru - Learns from a boy that a demon killed his parents, out of compassion Haohmaru takes the task to avenge the boy of his parents.