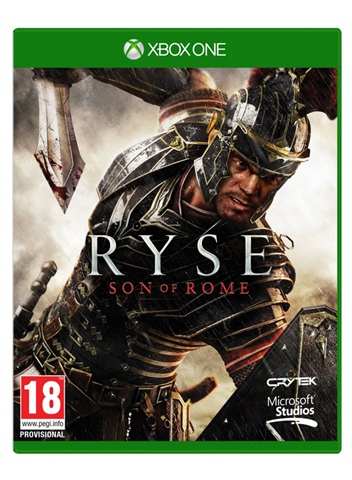 Ryse: Son of Rome Day One Edition for Xbox One

If you like - Films based on historical battles and massive scale war games then you'll love Ryse: Son of Rome's stunning visual style and epic war scenes. Ryse: Son of Rome tells the story of the young Roman soldier, Marius Titus, who witnesses the murder of his family at the hands of barbarian bandits. Seeking revenge, he travels with the Roman army to Britannia where he proves himself a soldier of phenomenal skill and quickly rises through the ranks. As Marius leads the army against the barbarian horde, his quest unravels and he discovers that he must return to Rome to find his vengeance. With the power of Xbox One, Ryse: Son of Rome presents conflict in the Roman Empire like you've never seen it before, from the northern reaches of Britannia to the Coliseum and the very heart of Rome. New advancements in performance capture allow you to interact with believably realistic characters featuring incredibly detailed facial animation and naturalistic emotion. Brutally intense combat Ryse: Son of Rome delivers a visceral, brutally realistic combat experience with epic-scale battles and breathtaking visuals that will set the standard for next-generation action games. Relive the ruthless history of ancient Rome as you engage in raw close-quarters combat against the barbarian horde, utilizing both sword and shield as weapons to attack, counter, block and pull off brutal executions. Epic-scale Roman warfare Experience the thrill of Roman combat as you charge into massive battlefields filled with more than 100 characters on screen at the same time, each with individually controlled AI. Unmatched intensity and realism enhanced with stunning detail combine to deliver an incredibly immersive action experience. Cooperative gladiatorial combat in the Coliseum The cooperative multiplayer experience in Ryse: Son of Rome plunges you into the brutal world of gladiatorial combat, where you enter the Coliseum to fight side-by-side with your friends against an ever-changing array of enemies, to the roar of thousands of spectators.2Kinect integration and battle formations Command legions using the all-new, high-fidelity Kinect. With the power of your voice you can command your surrounding units in battle in a strategic way to help defeat your foes, fire pilums or arrows, or block incoming attacks. Inventive SmartGlass features Ryse: Son of Rome incorporates deep SmartGlass integration that extends the gameplay experience to compatible mobile and tablet devices with features such as the following: Deep link. Launch Ryse: Son of Rome from SmartGlass directly into the campaign. Game DVR. Review and share the best experiences from your game with friends directly from your SmartGlass device. Context-sensitive Achievements guide and help. Achievements hints and game tips are synched to your location and situation. Character management. Manage inventory, character and upgrades direct from SmartGlass. Please note: Preowned may not come with the bonus day one download content.