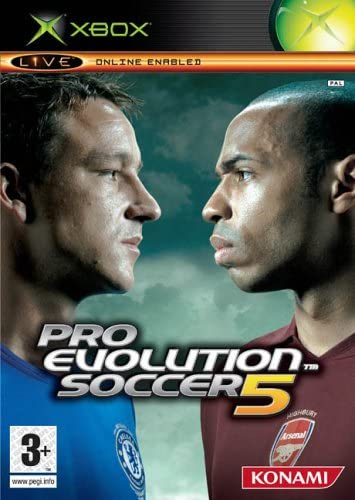 Ah verily, 'tis a thing of rare beauty, this game from Konami. EA's clunky, over-exposed and hugely overrated FIFA 06 may well sit atop the charts at the time of Pro Evolution Soccer 5's release, we reckon that this will change come the last week of October 2005, for a week or so at least. Pro Evolution Soccer really does deserve all the plaudits it gets from those footy fans more well informed than those who take FIFA at face value. A select group of folks have known for a long time that Konami do football better than anyone else, and if you haven't found out for yourselves yet, then PES5 is a great place to begin. The reassuring thing about the PES series is that it never makes any major leaps in its gameplay mechanic, therefore removing all fear of bamboozlement either on first contact or - like us - if you've left the other games in the series alone for a few weeks/months. Like it says on the wrapper, PES is all about evolution, not revolution. All the best bits from the series so far have been kept on board for number 5, while the on-pitch referee from the fourth iteration has gone, thank goodness: we thought he got in the way a little too much. Whether you're a veteran or a novice, it's always wise to warm up before plunging into one of the leagues or cup competitions, or indeed getting online and making an exhibition of yourself. Thus, Exhibition mode is a good place to begin, as is Training, just to brush up the skills factor. Once you think you're ready to take on the world (okay, maybe there aren't as many clubs and countries here as there are in EA's game, but think of the gameplay!) there is a selection of cup and league competitions to enter before the ultimate challenge that is Master League, a league that this time around is enhanced with new training settings and advanced player growth. As we mentioned earlier, no great leaps forward have been made with PES5, but it didn't need any. After all, if you buy a packet of Corn Flakes and you really enjoy them, you want your next pack to give you the same satisfaction, yes? That's settled then - Pro Evolution Soccer 5 for breakfast until PES6 (Crunchy Nut style perhaps?) inevitably comes along.