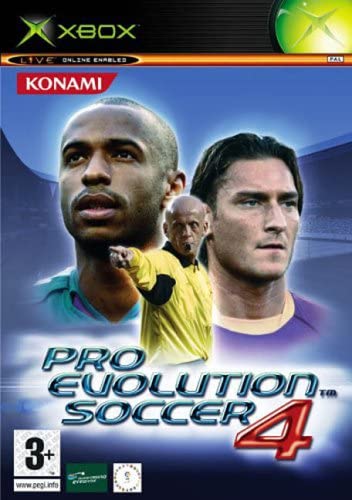 Developed by the legendary Shingo 'Seabass' Takatsuka and his team of footballing experts at Konami Computer Entertainment Tokyo, Inc. (Konami TYO) Pro Evolution Soccer 4 marks a quantum leap forward for both the Pro Evolution franchise and the football genre as a whole. With the series famed for its intuitive controls and the realistic movement of players on and around the ball, Konami TYO has further pushed the envelope with a wealth of new moves and tricks that flow fluidly within the fast-paced action. New free kick and penalty techniques can now be used, while an innovative indirect free kick move has been implemented to add further variety to set pieces. This level of realism has also been extended to the game's many players. More individuality can now be found in the ways players run, move both on and off the ball, and how they control the ball. Likewise, even more advanced player stats that govern every aspect of their play affect how well players can bring a high or fast ball under control, hit it first time past an encroaching defender, or flick the ball on to a team-mate. As such, the total control that has become synonymous with the series will ensure Pro Evolution Soccer 4 is even closer to the real thing. A new dribbling system is also available giving more control as players go one-on-one and try to pass opposing players, while crosses and cut-back passes can now be made with more precision. In keeping with this level of detail, player likenesses are also enhanced to match the noticeable individuality of the world's greatest stars. Both international and club players are instantly recognisable due to almost photo-realistic graphics, while additional realism is added via kits that get progressively dirtier as the match progresses. Pro Evolution Soccer 4 will also boast an on-screen referee for the first time. Whereas previous versions have featured an un-seen referee, Konami TYO's game now features an official who runs up and down monitoring play - and even steps in to calm things down when the action gets heated! The referee AI has also been further refined, with advantage being played for minor infringements, while each of the referees available will react instinctively to fouls and the flow of play depending on how strict they are deemed to be. With every aspect of Pro Evolution Soccer 4 refined and enhanced, it is no surprise that fans of the series are already hailing it as the definitive football title. Further additions to the game include more club and international teams, extra formation screens to offer total control over the way each team lines up and plays, while the ever-popular Master League has also been vastly improved. A new 'My Best Eleven' option allows fans to save their greatest teams for prosperity, and players can now be forced to retire through severe injury during the course of a Master League season, forcing the user to work around the loss of key stars and restructure around the abilities of suitable replacement players.