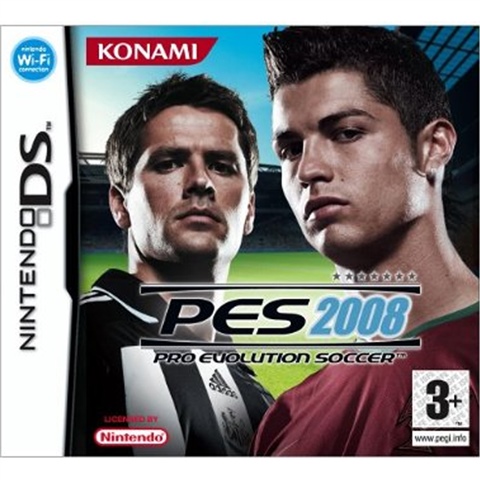 Pro Evolution Soccer 2008 (PES 2008) for DS is not that different a beast from its bigger brother console counterparts, but it does have some of those dual screen, stylus action-type treats in store for those footy fans of a handheld persuasion. The Nintendo DS WiFi element also comes into play in PES 2008, enabling up to four players to battle it out on the pitch. All the features you could reasonably expect from a handheld Konami soccer title in 2008 are present in PES 2008: note that even veterans of the PES series are advised to peruse the manual before setting out on the path to (possible) victory, as the control system is similar (i.e., not quite the same) as before. There are some truly neat little touches to learn via a number of button combos. Just don't make a fool of yourself and go read the manual! The DS version of PES 2008 includes Exhibition, Penalty Shootout and the knockout Konami Cup, which itself features three different sizes of tournament. There is also a variant on the World Tour system where you go and play against national teams from around the world. You can build an original team and try to become the champions of the world. The wireless capabilities of the console have also been taken advantage of in a more than worthwhile way, with a Network Mode enabling multiplayer games of up four players with a game cart each, while one-on-one matches can be played with just one cart between two players. Users can also trade players with friends, while coins are the in-game currency, and can be collected to buy special skills and to add players to your team.