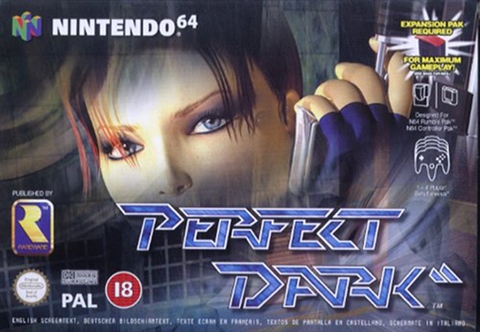 This is <I>the</I> game Nintendo 64 fans have waited for. Nearly three years after the uncloaking of super spy action-adventure <i>GoldenEye 007</i>, developer extraordinaire Rare introduces futuristic special operative Joanna Dark, a.k.a. Perfect. In <i>Perfect Dark</i>, players are sent on a fast-paced adventure from downtown Chicago skyscrapers to underground labs to undersea wrecks of otherworldly origins. Naturally, the storyline weaves a complex web of conspiracy, hidden agendas, and megalomaniac corporate leaders with deep underground (and off-world) ties. As spy-game fans expect, unraveling the plot and disposing of the baddies require a grab bag of hi-tech gadgets and special weapons--especially given the game's tougher <I>and</I> smarter enemies.<p> <i>Perfect Dark </i> features Dolby surround sound, widescreen compatibility, and--as expected--stunning special effects, including dynamic lighting, chest-thumping explosions and realistic smoke, dust and steam clouds. Characters are lifelike thanks to motion-captured animations and beautifully rendered 3-D models.<p> <i>Perfect Dark</i>'s multiplayer features are impressive. As in <i>GoldenEye 007</i>, up to four players can deathmatch in up to 20 different arenas. But that's just the start of the fun. The inclusion of up to eight computer-controlled opponents ("bots") adds an original component to the frag-fest. Humans can team with or against bots and even command a bot teammate to target specific opponents. Numerous original games, such as King of the Hill, offer so many variations that you just might forget that an engrossing single-player experience lies at the heart of the game.<p> Special note: The gameplay and graphics are greatly enhanced with the extra memory boost provided by the N64 Expansion Pak. The main single- player missions and multiplayer enhancements (three- or four-player games, as opposed to two-player games without the Pak, and other options) are only available with the N64 Expansion Pak (not included). If you own Donkey Kong 64, you received a Pak bundled in with the game. Others must purchase an expansion RAM Pak separately, a highly recommended option. <i>--Eric Twelker</i>