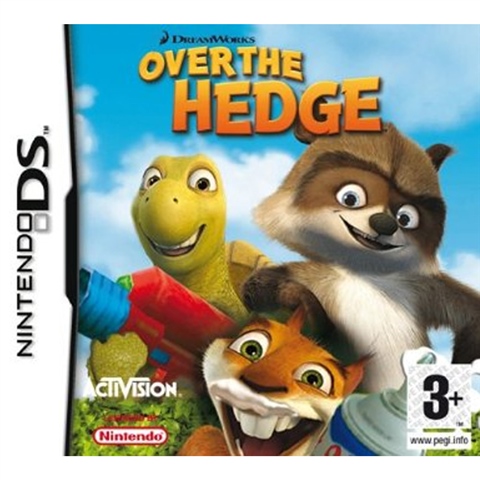 Over the Hedge (DS)

Based on the Dreamworks animated film of the same name, Over the Hedge for the Nintendo DS takes players on an all-new adventure set after the antics of the movie. Playersy assume the roles of RJ, Verne, Hammy and Stella, who turn a suburban neighbourhood into their own personal playground full of traps and dangerous obstacles. The first few missions establish the story set in the movie, after which players choose to take the role of one of the main characters in a quest to save their woodland home from being destroyed by a housing development project. Using the unique personalities and skills of RJ, Verne and Hammy, players must conquer a neighborhood filled with foes such as Nugent the dog, Vincent the bear, the Taxidermist and Gladys Sharp, the animal-hating president of the homeowner's association. With 20 different missions for players to conquer, players can use the Nintendo DS microphone to distract and surprise enemies. The detailed graphics are presented on both screens, with a view from behind the character on teh top scrnee, and a bird's eye view on the bottom screen. Two players action is available in the form of wireless mini-game with a single Over the Hedge DS cartridge.