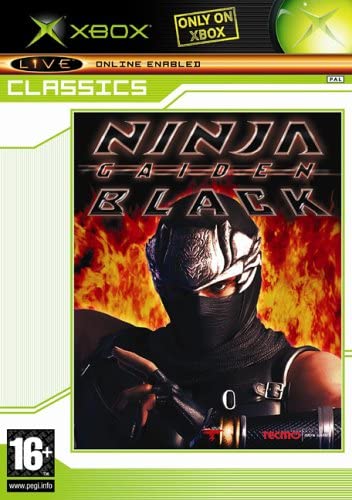 Ninja Gaiden Black is a re-release of Ninja Gaiden for the Xbox but with new content such as unlockable costumes, a mission mode, and more difficulty modes. Hard mode is unlocked right away if you have completed the original Ninja Gaiden and the saved file is present on your Xbox. Ninja Dog mode is also included for fans who felt the game on normal was too hard. This is unlocked by dying three consecutive time on the first chapter in normal mode. There are also two more levels of difficulty (very hard and master ninja), which are unlocked consecutively with the completion of the game on the previous difficulty setting. There are new enemies not included in the original release of the game and a new weapon called Lunar First seen in the Hurricane bonus packs. Mission mode includes 50 missions. Those who have ever played the Xbox Live! downloadable Hurricane packs (also included in this release) will be familiar with these. The missions are of varying length and difficulty. Your score is tracked for an on-line leaderboard over Xbox Live!, so you can compare your ninja prowess with your peers. There are some new in-game cutscenes. All three Ninja Gaiden games from the Nintendo era have been removed for a faithful emulation of the Ninja Gaiden arcade game originally released in the late eighties (which even requires to press a button to simulate the act of inserting a coin in the coin-op machine to start playing)