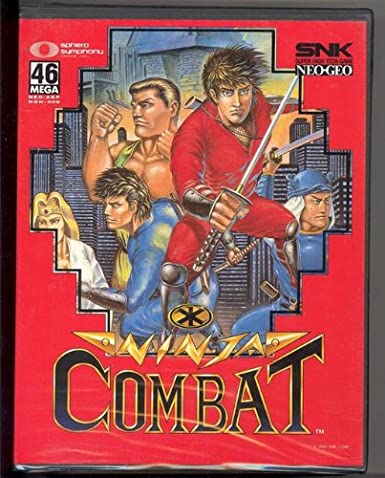 Ninja Combat puts you in the middle of, you guessed it, a Ninja invasion! The Kage Ichizoku clan has caused a giant tower to appear in the middle of the city, and it's up to our heroes Joe (Player One) and Hayabusa (Player Two) to take them down. Both characters can attack incoming enemies by using Shuriken (throwing stars) which can be upgraded into small, yet powerful, flaming stars. Speed powerups to make you move faster are also available. You can also pick up weapons such as Axes, Swords and Nunchucks, which are slightly more powerful, but your attack range goes down slightly. You also have access to a special move which makes your character fly across the screen, hitting all enemies in his way. Both characters can also unleash a fairly strong special attack which destroys many enemies on the screen, or does heavy damage to the bosses, but it takes away a quarter of your life. As you go through the game, you'll be able to recruit enemy characters to aid you in your quest. Each new character has its own strengths and weaknesses, as well as its own special attack.