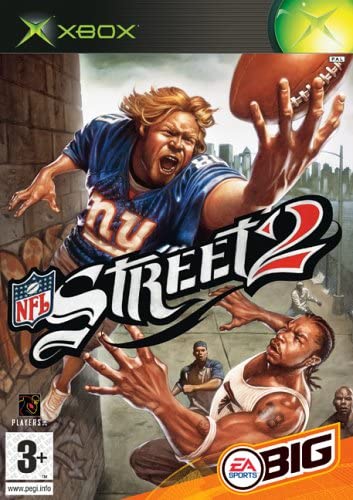 NFL Street 2 is the second game in EA's arcade football series. Players try to become the world's best urban footballer by conquering other teams using several gravity-defying tricks like up-the-wall passes, off-the-wall catches, and highlight-reel wall jukes. Like the other games in the Street franchise, the game is played with a small amount of players and a focus on arcade gameplay. Unlike the first game, the walls can now be used for run-up passes and receptions, or bonuses by aiming for posters and hotspots. There are twelve arenas to compete in (2 unlockable) and the players are licensed from the 2004 NFL rosters. Multiplayer is available on the PS2, PSP and Xbox versions. In singleplayer, there are various game modes such as NFL Challenge where the player has 150 days to build a team to take on a squad of legends. Progress is based on milestones where you sharpen specific skills to reach the top or beat sufficient teams. When five days are left, the team enters a final tournament.