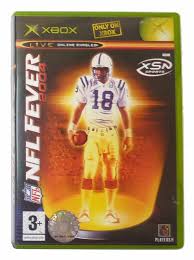 NFL Fever is back and better than ever. The third instalment of the exclusive Microsoft Game Studios football title for the Xbox, NFL Fever 2004 redefines the console American Football gaming experience. To start, NFL Fever 2004 is Xbox Live enabled. It's not about making sports video games a little better; it's about creating the next dimension of sports gaming: Competition beyond the game. For the first time ever create your own leagues, build your own rivalries, and stay plugged into your stats online. Gamers will also be impressed with the revamped AI of NFL Fever 2004, with significant offensive and defensive adjustments, animated NFL coaches (roaming the sidelines offering situational analysis), brand-new offensive playbook, totally re-worked stadium models, and 'Read and Lead' advanced passing. From traditional single-player and multiplayer gaming to league and tournament play on Xbox Live, NFL Fever 2004 is taking American Football gaming to the next level.