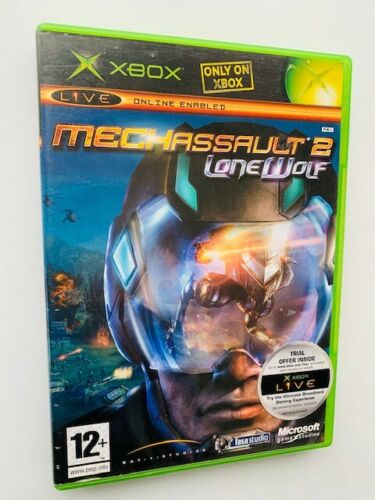 "MechAssault 2: Lone Wolf" continues the massive destructible environments, intense combat and addictive online multiplayer gameplay that gamers have been praising since "MechAssault" first hit Xbox. Continuing in the 31st century, "MechAssault 2" allows gamers to encounter entirely new experiences in the epic BattleTech world. This third-person action/shooter game defines immense destruction taken to another level, as each environment in the game's five worlds is fully destructible. Players choose from a variety of weapons and vehicles- from the stealthy Raptor 'Mech to the 'Mech-jacking BattleArmor-all equipped with different weapon configurations and artillery. They can embark on the brand-new and intensive single-player campaign, or test teamwork skills to defeat the enemy in the ultimate online multiplayer experience. In addition, players will benefit by strategizing and communicating with their teammates via the Xbox Live Communicator headset. Features Out of the 'Mech combat. Gamers are the man, not the machine. For the first time ever, "MechAssault 2" gives gamers the ability to get in and out of the 'Mech to experience warfare close up and personal. Gamers can attach to ally and enemy 'Mechs, scale walls or hitch a ride on a VTOL aircraft with the newest form of death-dealing transportation, BattleArmor. With BattleArmor, players can hijack enemy 'Mechs and use them to help their teammates rain down destruction on their opponents. Sense of scale. "MechAssault 2" uses the graphic superiority of the Xbox to introduce a new perspective that allows gamers to appreciate the size and power of their massive 'Mechs. With action and graphics so realistic, gamers feel like they are truly immersed in this world where 40-foot 'Mechs reign supreme. Compelling, brand-new single-player experience. Gamers delve into the deeply enhanced single-player campaign, filled with seamless storytelling that will open up the universe for a more compelling and richer single player experience. Evolutionary Xbox Live gameplay. Players battle for the Inner Sphere against live opponents from around the globe via Xbox Live. From the United States to Sweden, gamers strategize with teammates about the most effective way to search-and-destroy, while talking trash in real-time to German and Japanese opponents. Incredible destruction returns. Players experience more incredible explosions and devastating destruction as "MechAssault 2" pushes the graphical capabilities of Xbox. Witness intense, jaw-dropping weapon and damage effects that demand that players fire a weapon just to see the effect on the environment. Lasers light up the sky, Raptors disappear and Javelin LAM launchers fly though the air, wreaking havoc on the evil Hand of Blake.