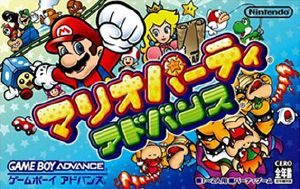 The first portable incarnation of the Mario Party series, Mario Party Advance shakes things up quite a bit on the GBA. With the focus on the single-player, there are all kinds of single-player mini-games, one giant single-player board to traverse instead of multiple ones (Shroom City), and all kinds of different Gaddgets and gameplay modes to indulge in. The main single-player experience involves traveling across "Shroom City," which is a major departure from the standard set-up in past Mario Party titles. You have the choice to be Mario, Luigi, Peach, or Yoshi, and depending on who you choose, you'll start at a different spot on the board, which is quite large.