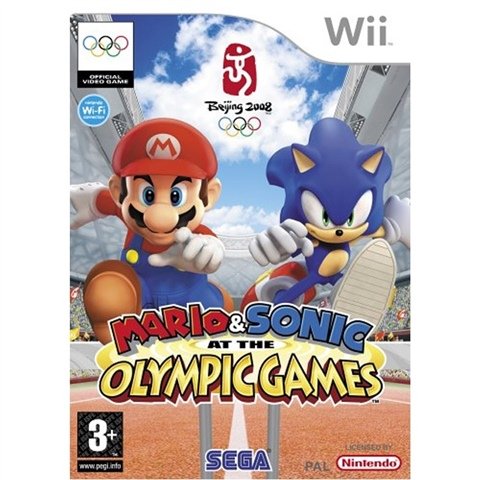 After years of "who is the best" speculation among fans, Mario and Sonic finally meet up to see who is the best! Set in the Beijing 2008 Olympics, Mario, Luigi, Peach, and friends go head to head with Sonic, Tails, Knuckles, and their group in a sports competition through various Olympic events. Among the participants, players can even include their custom Miis from their Wii system. Each character has different sets of attributes; these attributes give certain characters a slight advantage over others in particular events. For instance, Sonic is usually better at running than other characters. Though, it is possible to beat him with anyone. Gameplay is similar to Wii Sports, as there are several arcade style mini games that players can compete against up to three of their friends. Among the events are: skeet shooting, fencing, 100m and 400m dash, swimming, gymnastics, rowing, archery, table tennis, and many more that are unlocked through play as the video athletes earn medals, badges, and crowns. Mario & Sonic at the Olympic Games uses the Wii Remote (and Nunchuk for certain events) that can roughly mimic the various physical motions of the games. Players can post their best records and times online via the Wi-Fi connection to see how they fare against other players.