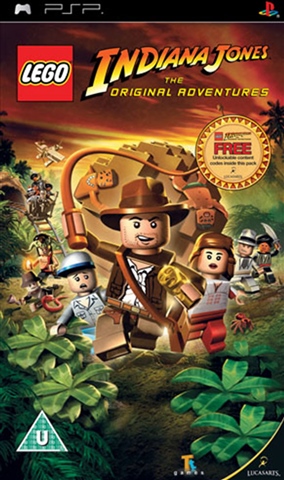 Did you used to spend hours wondering what it would be like if, in the opening sequence of Raiders of the Lost Ark, Indiana Jones had to evade a tumbling ball of LEGO instead of rock (or possibly papier mache, depending on what they were using for the special effects back then)? No? Was that just us..? Well, in any case, Traveller's Tales has answered the question for us with Lego Indiana Jones: The Original Adventures. In a nutshell, Indiana Jones and his supporting cast have been given the same treatment as the Star Wars crew - they've been made all blocky. Players get to re-enact the entire first three Indy films as characters made out of LEGO in a LEGO environment faced by threats made out of LEGO. Get the gist? So, it's off to the jungles of South America, the mountaintops of India and even the home of the Holy Grail with everyone's favourite fedora-wearing archaeologist adventurer. Along the way, players will have the help of Dr Jones' supporting cast, including the likes of Marion Ravenwood and Short Round. Players will be able to swap between them at will, even combining body parts to create brand new heroes. If you like your adventures to come in customisable brick form, this one's for you.