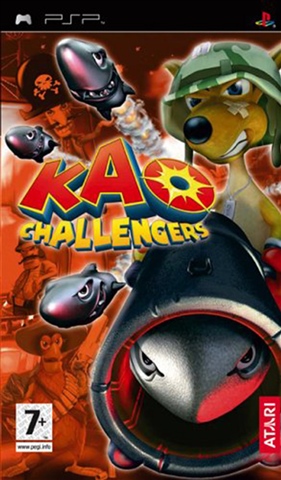 Technically advanced and visually brilliant, Kao Challengers boasts a single player game alongside a diverse multiplayer experience which makes full use of PSP technology. Quick to pick up and play, but with a depth of gameplay that keeps players absorbed, Kao Challengers presents a rich and colourful gaming universe with 25 vividly rendered levels set across six diverse worlds ranging from Kao's natural habitat of Australia to the rather less sun-baked Arctic. Kao faces a succession of furious enemies on his journey to save the animal world from the clutches of the malevolent hunter Barnaba and his band of cruel henchmen, each with their own fiendish ways to hamper Kao's progress. Luckily, he doesn't face them alone. However,with the support of only a firefly and a parrot he'll need more than just a spring in his step to come out on top. Luckily Kao is equipped with a thoroughly devastating range of attacks including brutal tail attacks and that antipodean favourite, the boomerang throw. With off-beat transport including a snowboard, a catapult,a pelican, a water barrel and a motorboat, Kao has a plateful of travel options to choose from on top of his mean kanger-moves.