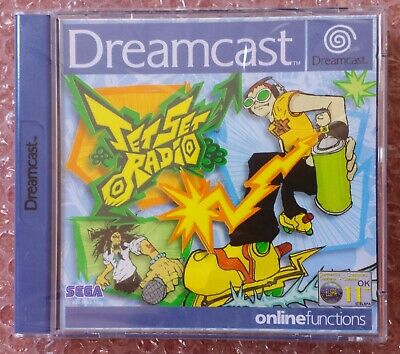 Tokyo-to, a city not unlike Tokyo, somewhere in Asia, in the near future. This is the story about the GG's, one of three rival teenage gangs who ride motorised inline skates and are tagging the streets with graffiti. There is a turf war going on between the gangs GG's, the Poison Jam, and the high-tech freaks, the Noise Tanks. The evil Rokkaku Corporation has the corrupt police in their grasp, and, headed by Captain Onishima, the cops are hell-bent on subduing the unruly teen protagonists. But there is light in the darkness: the underground DJ, "Professor K," and his Jet Set Radio station keep tabs on what is happening on the streets of Tokyo-to, and soon our teens will have something much darker than the police to worry about. As one of the GG's, you skate through a variety of different levels, from busy streets to run-down rooftops and smelly sewers where you learn new moves, collect spray cans, and tag the streets with graffiti. New graffiti designs can be unlocked by finding "Graffiti Souls" in levels, by designing new graffiti yourself, or by going online and downloading any images you find while browsing the internet. Fight the rival gangs "Poison Jam" and the "Noise Tanks", the evil mega-corporation Rokkaku and their police cronies in this fresh take on the platform genre, mixing traditional platform elements with skating similar to that of the Tony Hawk's Pro Skater games. Players are scored on their performance in a level, both on the level of graffiti attempted as well as optional tags and skating tricks. As the game progresses challenge maps open that test the player's ability to do larger tags, more tricks, or race against an opponent. The American and European release contained two new levels based on New York. The story and order that you meet characters was modified to include these two levels. Both releases also have different unique soundtracks for these levels. The 2012 HD version has widescreen HD graphics and a new camera system, as well as all the original songs but one. Sega | Dreamcast Exclusive | Extreme Sports