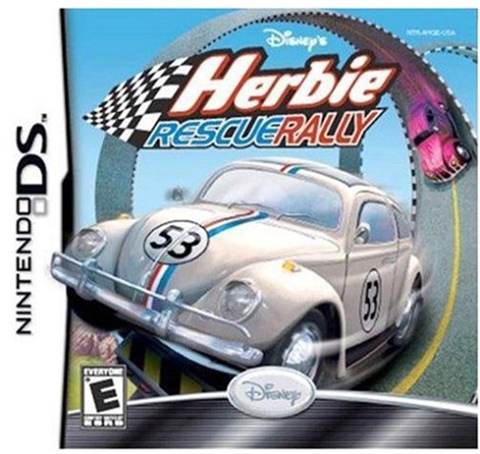 In Herbie: Rescue Rally, you play everyone's favourite bug, Herbie, who comes to the rescue of a young girl. Louise Noble must save her family's animal sanctuary from the E.Vile corporation which plans to turn it into a toxic chemical factory. The only way to get the $1million needed to buy back the sanctuary is to compete in the cross state race, against Edward Vile himself, and win. This won't be easy because the E. Vile corporation owns Herman, Herbie's arch-enemy. There are four courses in the cross state race; each one with many different tracks to compete on. Throughout each track there are various power-ups and weapons to pick up, such as tyres, oil and speed boosts. There are also '53' tokens which enable you to do death-defying stunts at certain points on the track. There are a variety of different races to compete in during story mode. Players will compete in circuit races, head to heads, time trials and speed trials. Multiplayer mode is similar to single player, with up to four players racing on one circuit. Each player must have a copy of the game to play. Multiplayer offers two extra power-ups that aren't included in single player mode.