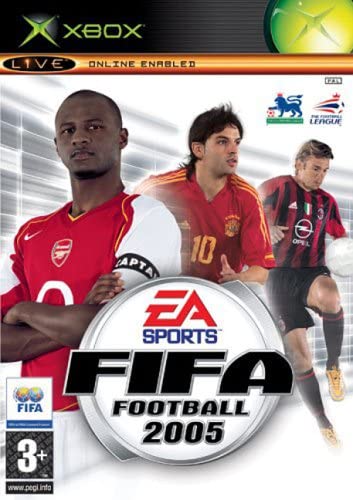 Well, what do you do when the masterful Thierry Henry has gone and transferred to Pro Evolution Soccer? Get his club captain signed up along with Morientes and the deadly Andriy Shevchenko, that's what. FIFA Football 2005 for XBox arrives in the UK several weeks in advance of its only real rival, eager to snatch some sales from those not prepared to wait for the much-anticipated Konami game. Whaddya gonna do? While Konami delight in satisfying the more discerning footy fan, EA Sports take the lead when it comes to genuine innovation, something that'll keep its loyal fanbase coming back year after year. And so to the action on the pitch: EA Sports have crammed a lot into such a small space with some really innovative new moves and tricks, backed up with some returning favourites. The First Touch system is the biggest deal for most of us: you have to use the right analogue stick to trap or flick incoming passes and gain extra space, as the speed and vision of every player in the game is transplanted direct to your own fingers. 'Off the Ball' control makes a return, having debuted in FIFA 2004 and is better than ever in 2005. You can take command of players not in possession of the ball by calling in tackles, jostling for space and sending your team-mates on runs. You can also control the movement of receivers at throw-ins as well as free kicks and corners. Aspiring soccer stars can also realise their dreams of superstardom in the all-new Creation Zone. With a nod to the Tiger Woods games from EA Sports, you can now customise players using the advanced modelling system, or set yourself fresh challenges by creating new tournaments. FIFA Football 2005's deep Career mode tests your skills both on and off the pitch. Make the tough decisions behind the scenes to turn your team into real challengers and then guide them in a 15-year quest for silverware. That's right, a 15-year career - that's a long time in player/management. FIFA Football 2005 features more official leagues than any other soccer game, boasting 18 leagues, 350+ clubs, 38 national teams and around 15,000 real players. EA Sports Online gives you the chance to export your very own brand of football to the rest of the world - well, those with a broadband connection anyway - and trade verbal blows or let your feet/fingers do the talking. With authentic crowd chants, officially licensed stadiums and a variety of weather conditions (orange ball, orange ball!), FIFA Football 2005 gives you total football realism.