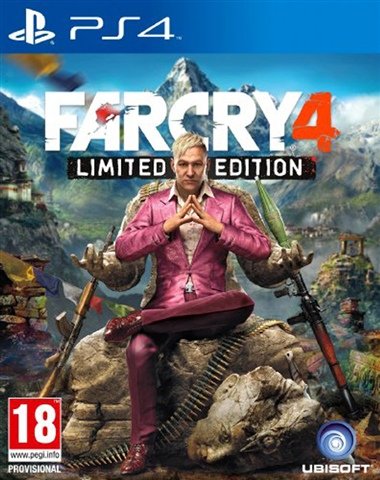 Far Cry 3 was a commercial and critical hit and, while Ubisoft has given the series a bit of a beefing up for the sequel, it knows not to mess to much with a winning formula. Like its predecessor, Far Cry 4 is an open-world shoot-'em-up that encourages players to take their own approach to both the expansive terrain and the enemies they have to take down. Players take on the role of Ajay Ghale returning to Kryat, the country of his birth, to fulfill his mother's dying wish and scatter her ashes. It's a country nestled in the Himalayas, with brutal snow-capped mountains that plummet to lush, exotic forests. And it's riddled with strife. There's a rebellion underway to overthrow Pagan Min, the oppressive dictator known as much for his eccentric style as for his cruel reign. The vertical landscape is a calculated decision by Ubisoft, designed to change the way gamers play, grappling up cliffs or soaring along valleys in their wingsuit. New to the series is the gyrocopter, which allows players to take to the skies for quick travel, and to see Kryat in all its glory. As ever, players have a variety of gameplay options open to them. It's up to you whether you take a sneaky approach, snipe from a distance or just pile in guns blazing. Don't neglect the wildlife, though, as animals can be just as big a threat as the humans you face. Or, they can be allies. The most obvious example being that you can use an elephant for transport, or maybe just use it to trample your foes. For the first time players can invite a friend to engage in some open world co-op. In a nice little nod to Far Cry 3 Hurk, from the Monkey Business add-on for Far Cry 3, joins the fray.