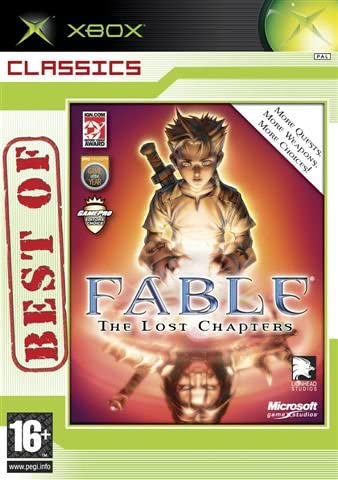 At the town of Oakvale, in the land of Albion, a boy is sent on an errand by his father to get his sister a birthday present. When the deed is done, destiny unravels: the once peaceful town is suddenly under attack by bandit raids. The frightened child soon discovers his world crumbling in a matter of moments. Lying beside the body of his dead father, the boy is attacked by the gang, but is fortunately saved by a hero called Maze. He is then taken to the Heroes Guild where he is raised. Time has passed and the child has grown, and is ready to take up his own quest to rid the land of monsters and discover who was responsible for the deaths of his family. Fable is a third-person action role-playing game that casts the player as "the child" or "the hero" who must perform various deeds to graduate from the Heroes Guild and define himself. The story progresses when the hero chooses "main quest items" from the Guild. Alternatively, there are also other quests that the player may complete in order to obtain gold and fame. Some quests allow the hero to "boast" in front of his fans. Boasting before a quests adds added difficulty, such as "completing the quest naked," however will allow additional gold and fame to be obtained.