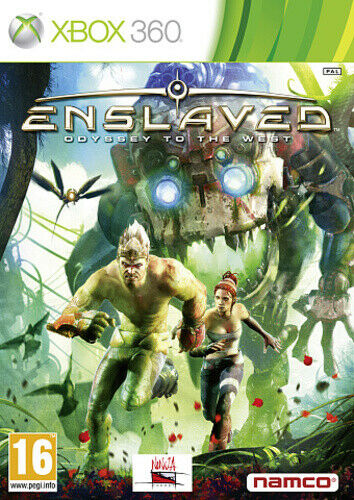 Enslaved Odyssey to the West ( XBOX 360)

Ninja Theory has dived straight back in with another big budget title: Enslaved: Odyssey to the West, a futuristic take on the Chinese tale Journey to the West. Not content with just having Andy Serkis on board as director and lead character Monkey, the developer brought in Alex Garland, of The Beach and 28 Days Later fame, to script the tale. Set in a post-apocalyptic America, you play as Monkey, a gruff muscle-man who has been abducted and incarcerated in a slave ship. The reason these ships are capturing human slaves is yet unknown.. but luckily Monkey manages to bust out of his cage along with Trip, another human abductee. So begins Monkey and Trip's journey through machine-infested jungles, overgrown cities and along dilapidated highways; all beautiful representations of what a post-apocalyptic America could be like. Every action has been lovingly captured and Ninja Theory's talent for characterisation really shows through. Combat is split between Monkey's head-on clashes with the machines, and tactically getting to - or even past - the enemies using teamwork. There's an element of tactical thinking to the combat, with multiple approaches to each scenario. You are able to unlock a number of new combinations and power ups for certain moves. There are even grenades and shock attacks to mess with, the latter being a perk of Monkey's enhanced melee abilities. The mix of great acting, visuals and set-pieces will make Enslaved one of the most cinematic gaming experiences you will play in 2010.