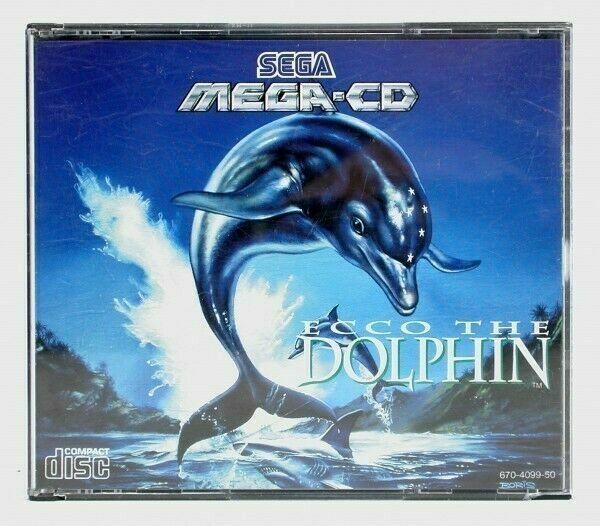 Travel through time along with Ecco the dolphin, in the only game that could call itself a "dolphin simulator". Indeed, you can do pretty much everything a typical dolphin does, including eating fish, surfacing in order to breathe, using your biological sonar and of course, jumping out of the water to amaze your friends. The storyline is actually deeper that one may think by looking at the box illustration. As Ecco, you are the only dolphin who managed to escape from a giant whirlpool which sucked down your entire pod. The five shining stars on your forehead show that you are the chosen one to save them. But that task will be not be an easy one, as you will have to travel through time and space with the Atlantean time machine, and meet the mystical Asterite in order to defeat the Vortex Queen. The main part of the gameplay in Ecco the Dolphin relies on exploring various aquatic levels. They are usually nonlinear, with submerged caverns and tunnels branching out from the main bodies of water. The navigation is impeded by islands that must be hopped over, volcanoes that spit hot lava, powerful currents, deadly spikes, and dangerous predators such as octopi and giant eels. The sonar ability has multiple functions: you can communicate with friendly animals, map out the nearby area (echolocation), activate glyphs, and eventually defeat enemies. Activating glyphs is necessary because they can unlock unexplored parts of the current level, including the exit that leads to the next area; some of them can even bestow the gift of invincibility on Ecco for a limited time. You must keep an eye on the life and breath meters. Dolphins can't stay underwater for a long period of time and must return to the surface for air. However, the cavern systems may hide the occasional pocket of air as well. Every time you are hit by spikes, lava, or an enemy, Ecco loses health, and once it reaches zero you will have to replay the level from the beginning. The life meter can be replenished by eating fish or by finding healing clams, called the Shelled Ones, and communicating with them. It's possible to avoid most enemies, but Ecco can kill troublesome creatures using the death sonar or by charging them head-on.