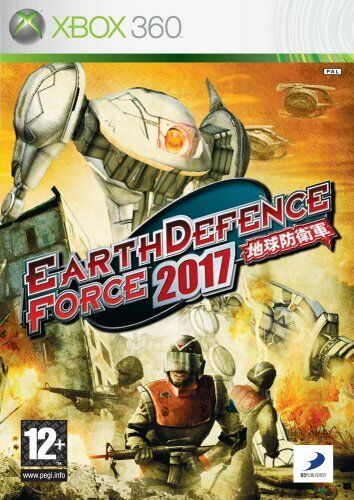 Earth Defense Force 2017 is the third game in the Chikyuu Boueigun series well know in Japan, and the first one released in North America (the previous two Chikyuu Boueigun were released in Europe under the names Monster Attack and Global Defence Force respectively). The game is a third-person 3D shooter featuring fights with floods of large enemies on gigantic, sprawling maps. The game's story, which seems to be a re-telling of Monster Attack as it is set in 2017 (Global Defence Force takes place in 2019 and indicates that Monster Attack occurred two years earlier), places the player in the role of an EDF infantry man tasked with defending the Earth from hordes of alien invaders. The game features 53 missions where you fight against aliens on city streets, in underground caves and on coastal zones. You have access to 170 weapons divided into 7 categories including assault rifles, rocket launchers, flamethrowers, grenades and more. You unlock new weapons throughout the game by picking up Weapon objects, dropped by killed enemies. Weapon objects provide you random weapons including those the character already has. On some maps there are also helicopters, battlemechs, tanks and bikes that can be controlled. The Xbox 360 version features 2-player split-screen multiplayer where you can play cooperative or versus battle. The PS Vita version has an online cooperative multiplayer mode for up to four players.