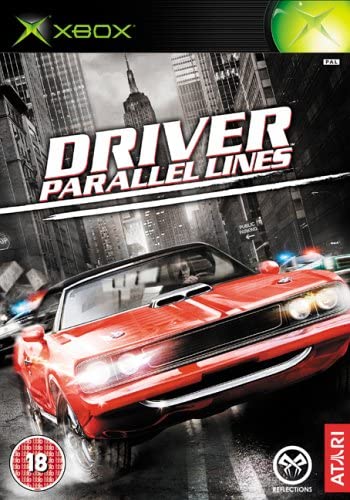 Driver: Parallel Lines is the fourth game in the Driver series, following the story of TK. In 1978, TK (who was then an 18-year-old driver-for-hire who had just graduated from high school) was sentenced to 28 years in prison for a crime he did not commit, and is released from prison in 2006. Now, with his driving skills, he seeks revenge against the police department for having to serve time for something someone else should've gone to prison for! Unlike Driv3r, Driver: Parallel Lines mostly takes place behind the wheel, returning back to the formula that made the first game a classic. The game still has a GTA-style open-ended design, though, and you can still exit your vehicle for some on-foot action. However, there's no reason to exit your vehicle unless it's damaged and you can no longer drive it, as almost all of the game's missions involve cop car chases. If that's the case, then you can either go to the repair shop to repair your vehicle, or just steal someone else's vehicle! Until then, you can punch the cops with your fists and steal their weapons when they're dead, so that you can use them for future on-foot combat. The game takes place in both 1978 (before TK went to prison) and in 2006. The 2006 setting has a much more modern soundtrack than the 1978 setting, which has a mostly disco soundtrack. Obviously, the 2006 setting has the architecture, technology, and cars of today.