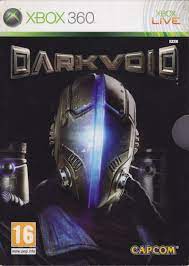 It already started to be a bad day for William, owner of a struggling cargo delivery operations, as his old girlfriend shows up and announces himself to his next delivery. So it wasn't really getting worse when the plane crashed after they entered the Bermuda Triangle. But still the cause of the crash was a bit strange - Will could've sworn he had seen an UFO. Soon after he encounters the first robot aliens and unwillingly enters a fight not only for his own but the worlds survival. The player takes on the role of William from a 3rd-person-view. On the ground, the game plays much like any other 3rd-person-shooter with William being able to carry two different guns at each time and having grenades at his disposal. Each enemy the player kills will drop tech points which can be used to upgrade each weapon three times to make it more powerful. But storming into a group of enemies won't help Will to survive long even with that kind of fire-power. Instead the game uses a cover-system that allows the player to blind-fire and regenerate his health automatically.