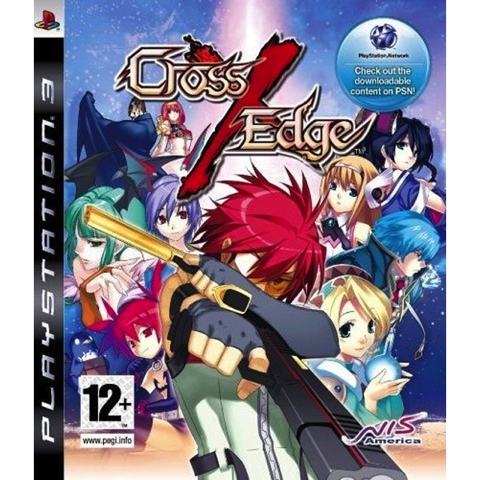 Cross Edge is, surely, all of a Japanese Role Playing Game (JRPG) fan's Christmases, birthdays, Easters and random gift-giving events come at once. This decidedly hardcore tactical RPG brings together your favourite characters from the Capcom, Bandai Namco, NIS America, Idea Factory, and Gust stables for one huge great doe-eyed slugfest. It's a veritable who's who of anime archetypes, stocked to the brim with spiky haired heroes and provocative, scantily clad heroines. Included for your gaming pleasure are the likes of Demitri, cat-girl Felicia, Morrigan and Lilith from Capcom's Darkstalkers series, Lyner and Ayatane from Ar Tonelico, Marie from Atelier Marie and Etna and a few members of the Prinny Squad from the world of Disgaea. Given the wide range of characters, developer Compile Hearts has opted to create a brand-spanking new world for Cross Edge. Teenagers York and Miko wake up in an unfamiliar setting with a spot of amnesia. They come across the similarly memorially-challenged Miss Morrigan and jointly go for a wander, quickly picking up some familiar faces along the way. It turns out that the reality they now inhabit is being sustained by the souls of imprisoned folk being sucked in from other worlds, courtesy of some suitably tyrannical triplets. To watch out for their world, the triplets have brought along some of the heroes' respective villains. JRPG fun ensues. The battle system is a mix of classic RPG combat and strategy. It's a deep system that's not for the uninitiated, but Compile Hearts was never pitching at the casual crowd. Hardcore JRPG fans should get a lot out of it. So, fans of doe eyes, skimpy outfits and hour upon hour of complex, rich battling - rejoice!